Our bar area offers you a cosmopolitan vibrancy unlike anywhere else in Johannesburg. Overlooking Rosebank and all the way out to the Magaliesburg mountains, you are invited to dress up or drop in and stay as long as you like. With unreserved seating, Marble’s bar is just the setting to enjoy a moment of contemplation, network, connect or sit and watch the storm roll in across the Johannesburg skyline. Great music, flame inspired tapas and of course the finest cocktails, wine and spirits are always on offer.

There is no better place to meet for a drink. Come and join the rest of the city. 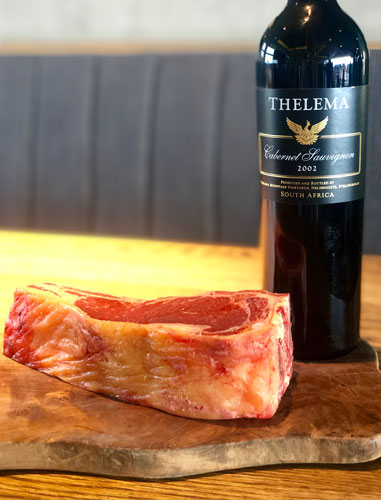 Thelema was used to be a fruit farm, until it was purchased by Gyles and Barbara Webb in 1983. Thelema is one of the highest and coolest estates in Stellenbosch. The farm has been producing Cabernet Sauvignon for the last 30 years. In 2002, the cellar master was Gyles Webb and the head winemaker Rudi Schultz.

The wine is made from 100% Cabernet Sauvignon, clones 163 & 164, which is planted on Hutton soils (decomposed granite). These vines were planted in 1988 and 1989. The 2002 harvest was described by the farm as; “Challenging and patchy, but top producers show fine concentration with moderate alcohol.” At harvest the berries were harvested, de-stalked, hand sorted and then crushed. The wine then spent 20 months in 225L French oak, which of 50% was new wood.

We acquired the wine on a recent auction we attended. As a Sommelier, I am always very concerned about a provenance of a wine, especially when it comes to older vintages.
I must say, when I opened a bottle of this recently, the cork was in good shape. The wine had a youthful nose with aromas of blackcurrants, eucalyptus, led pencil and a gravelly minerality. On the palate the wine showed good acidity, good structure and some elegant tannins. I had to double check if I had correctly opened a 2002, because this wine is only entering its prime drinking phase now.

At Marble, I would recommend our Migo’s Jersey Sirloin on the bone. The distinctive yellow fat on this cut that melts into the meat when cooked in or Josper oven, served with our Marble fries is a match made in even.

Limited bottles were purchased at the auction, so only a few corks remaining before this is wine sold out.

From the jar, on the bar